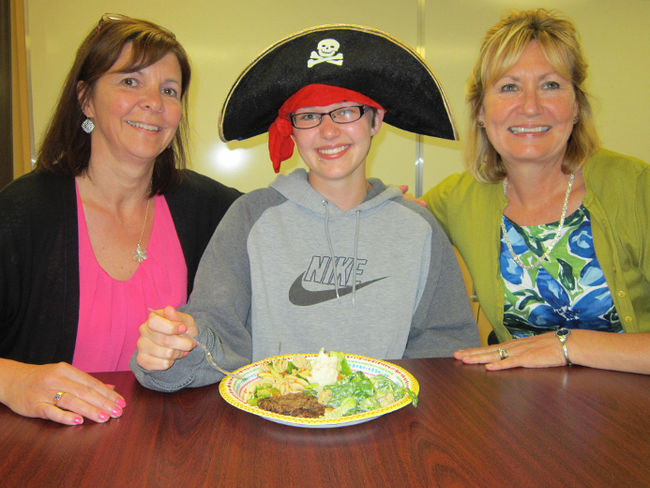 About 70 people gathered at Children’s Aid Society headquarters in Townsend May 14 to mark the first official Children & Youth In Care Day in Ontario. Among them were, from left, Shari Gardener, an executive assistant and head of public relations for CAS in Haldimand and Norfolk, Virginia McArthur, a CAS Youth In Motion ambassador and Janice Robinson, executive director of the local CAS. (MONTE SONNENBERG Simcoe Reformer)

TOWNSEND – Privacy is essential to the operations of the Children’s Aid Society of Haldimand & Norfolk.

The agency is on the front line with troubled children at the most vulnerable time of their lives. All concerned recognize the need to navigate these difficult waters with the utmost discretion.

But where there is secrecy there is also speculation. As such, CAS recognizes it is vulnerable to others defining what it is and what it does. Some think the time has come to lift the veil, if only a little.

The province has heard the concerns and is taking steps to help CAS define itself in the community.

Recently, the Wynne government proclaimed May 14 as Children and Youth In Care Day in Ontario. The local CAS marked the occasion with a barbecue at its headquarters in Townsend. About 70 CAS employees, foster children, foster families and local dignitaries attended.

Shari Gardener, an executive assistant and public relation co-ordinator with the local CAS, says Children and Youth In Care Day is an occasion to showcase the agency’s programs and many success stories.

“It’s to increase awareness and reduce stigma and to show the resilience of these children,” she said. “And it’s an occasion to show how proud we are of our youth.”

In a rare move, one of the local CAS’s 275 foster children was made available for an interview. She’s Virginia McArthur, 16, a native of Niagara Region who is living with a foster family in Norfolk and attending high school here.

McArthur is one of the local agency’s Youth In Motion ambassadors. Part of McArthur’s mandate is to speak about her three-year experience within the system and help others entering foster care to understand that CAS has their best interests at heart.

“I know it seems really hard right now, but it gets better,” McArthur said. “I know it looks like these people are here to make your life worse, but they are here to help you. And they will help you.”

McArthur recalled the fear and anxiety she experienced when, at age 13, the decision was made to place her in a more positive environment. Along the way, McArthur has received support she never expected.

“Financially, they’ve helped out a great deal,” she said. “Without CAS, I don’t know where I would be. Their motivation has really inspired me and encouraged me to live to my full potential. The support is great. It’s a support system that just keeps on circulating.”

Few know that CAS often continues its support beyond the age of 18. Youths stop being minors at 18, but Robinson says that’s a poor excuse to cut CAS clients loose.

“We don’t do that to our own kids,” she said. “That’s a false way of launching them. We have ways of supporting our kids when they are in apprenticeship programs or engaged in post-secondary programs.”

The local CAS works in partnership with foster parents in nearly 100 households. Another 30 homes are defined as “kin care” where wards live with members of their extended family. The local CAS appreciates the support, but it can always use more.