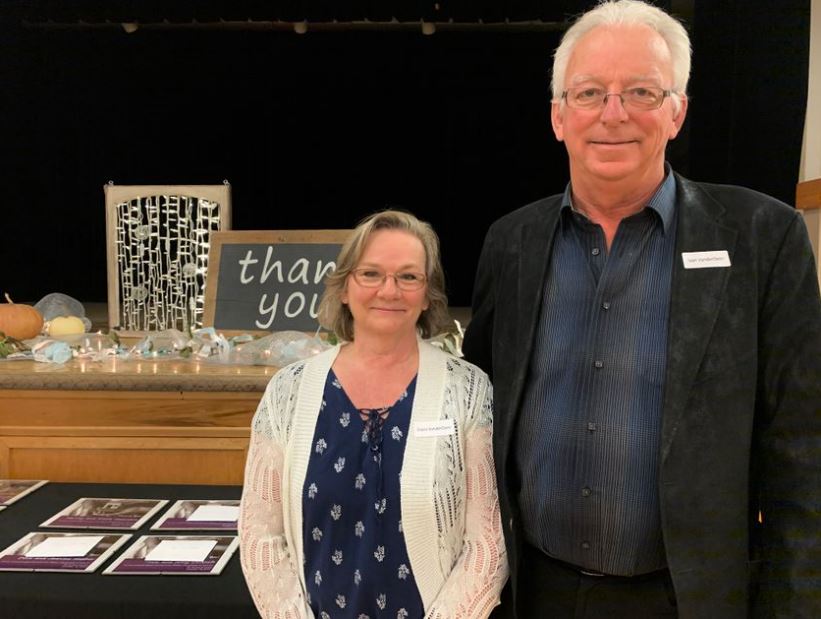 Diana and Ivan VanderDeen were recognized for their 20 years of fostering at the Children’s Aid Society of Haldimand and Norfolk awards event on Wednesday evening. (ASHLEY TAYLOR/SIMCOE REFORMER)

Local foster and kinship families were recognized at a dinner and awards ceremony on Wednesday evening.

The Children’s Aid Society of Haldimand and Norfolk invited the caregivers to the Jarvis Community Centre to show appreciation for the work they do all year.

Jennifer Mels, foster care supervisor, said the night was a time to reflect and focus on the positives.

“The positives are what drive people forward and we really hope they remember them,” said Mels.

Diana and Ivan VanderDeen were recognized for their more than 20 years of being foster parents.

The couple, married for 41 years, have seven children of their own.

“For us, it was just an opportunity to help,” said Diana. “Our daughters came home with kids that were having troubles at home and it didn’t feel right to tell them someone else should help them.”

The most foster children the family had at one time was four.

Ivan noted that if everyone made a positive difference in someone else’s life it would change the world.

“It’s one of the most challenging things you can ever do, but it’s also one of the best experiences we’ve ever had,” he said.

While the VanderDeens have finished fostering, their biggest highlight happened a week ago. One of the girls they used to foster visited them with her partner and three children. She thanked the couple for everything they did for her, and credited them for her still being alive.

Both Ivan and Diana agreed that the hardest part of fostering is watching the kids leave.

“We fostered mostly teenaged girls, so when they got to 16 or 18 they figure they’re old enough to go out on their own,” said Diana. “It really tugged on our hearts to watch them leave but we learned a long time ago that if you try to keep them when they don’t want to be there it works the opposite.”

Laurie Toth, the VanderDeen’s support worker with CAS, said they went above and beyond while they were caring for foster children.

“They aren’t known as Diana and Ivan, they are called Mom and Dad,” said Toth. “I would say that this was their calling, they had seven kids of their own and their house was always full. They took in mostly teenaged girls and went with it in stride, it takes special people to do that.”

“We’ve always had the philosophy that if you come into our house, you’re one of our kids,” said Ivan.

This philosophy means that the couple have stayed in contact with a large number of children they have welcomed into their home.

In Haldimand and Norfolk, there are currently 89 approved foster and kinship families. There is a need for foster families of all different age groups, cultures, and lifestyles.

There is an information night in November for anyone considering fostering, adoption, or kincare. More information on that event is available on the Children’s Aid Society website.