OPR’s are independently owned and operated treatment foster care homes and group homes where care is provided to children and youth in a small group setting. They are licensed by the Ministry of Children and Youth Services and are required to renew their licenses annually.

Unfortunately, there is a critical shortage of foster homes in Haldimand and Norfolk that can manage the behaviour or specialized treatment needs of some of the children and youth that come into care necessitating the use of group homes.

CD 98.9 FM has agreed to host a special, morning show broadcast on Monday, May 17, 2010 which will feature stories from youth in group homes, interviews with youth, foster parents, adoptive parents and Society staff. The broadcast will begin at 6:00 am and continue until 9:00 am taking the form of a “radiothon” style, live recruitment campaign.

The broadcast will feature child specific profiles where radio hosts will intermittently make public pleas to the audience to foster or adopt a specific youth or child.

The campaign will provide a wonderful opportunity to bring youth and children back to their communities. It is our hope that through this very unique and transparent public plea to “bring our children home” we can recruit suitable homes for some of our youth and children. 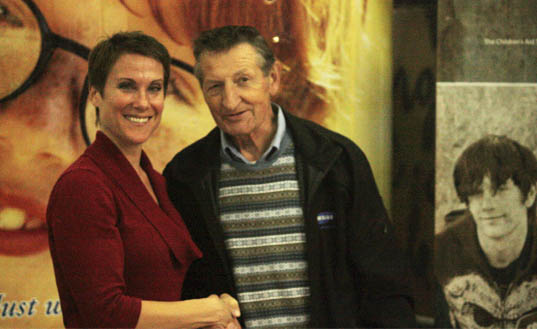 The weather at the 2009 Norfolk County Fair didn’t appear to deter over one-hundred thousand people from passing through the gates this year, according to Fair administration.

Fortunately, Society volunteers and staff were immune from the elements at the Norfolk Fair in our display booth inside the commercial building.

One of the highlights of the event was a visit from Walter Gretzky, who stopped by the Children’s Aid booth to discuss the need for foster families in our communities.

Here are some combined figures regarding total attendance and service inquiries for both Fairs:

The Children’s Aid Society of Haldimand and Norfolk would like to thank all those who stopped by to talk to us about our services and inquire about adoption and fostering.

Here are some more more images from both fairs:

Child abuse remains a serious concern as many children and youth are at risk of abuse or are suffering from lack of proper care. Children’s Aid Societies protect children from abuse and neglect, help parents and caregivers build healthy families and provide a safe, nurturing place for children and youth to grow up and realize their full potential.

Children’s Aid Societies can only act to protect children from harm when a concerned citizen or professional calls to report their suspicions or a parent calls for assistance. More education is needed to remind the public that everyone has an ongoing responsibility to protect children by reporting suspected child abuse.

According to the Child and Family Services Act, Section 72.1, everyone, including professionals who work with children has an ongoing obligation to report promptly to a Children’s Aid Society if they suspect that a child is or may be in need of protection. A child is in need of protection where there is a risk of sexual, physical or emotional abuse from an adult, caregiver, family friend or stranger or when a caregiver fails to provide proper care or deprives a child of support and affection.

There are 53 Children’s Aid Societies in Ontario. They are incorporated not-for-profit agencies governed by volunteer boards of directors elected from the local community and funded by the Province of Ontario.

Child welfare agencies are exclusively mandated by the Child and Family Services Act to protect children from abuse and neglect employing clinically trained child protection workers who are guided by the provincial regulations and standards, Child Protection Standards and Tools in Ontario and the Ontario Child Welfare Eligibility Spectrum to determine the kind of support and service needed to keep children safe and families stable in situations involving child abuse and neglect.

Under the Child and Family Services Act, Children’s Aid Societies are required to:

Children’s Aid Societies investigate allegations of abuse and neglect from concerned citizens, neighbours, health care professionals, educators and police. Whenever possible, Children’s Aid Societies work to keep children at home with their biological families, but when children cannot remain at home or live with relatives safely, societies offer a variety of substitute programs and also facilitate the adoption of Crown wards (permanent wards of the province).

Of the children who were cared for by a society during the year, 9,468 came into care upon completion of abuse investigations:

The number of childrencoming into care each year has continued to decline, in line with the general downward trend in Ontario’s child population. In 2007/08 9,468 children came into care, a 26% decline compared to 2003/04. The rate of admissions into care was 3 childrenper 1000 of Ontario’s children population.

Children’s Aid Societies also provide assessments, crisis intervention, counseling and services to prevent child abuse and neglect. In addition, Children’s Aid Societies help vulnerable families protect and support their children. Many prevention programs are offered in partnership with other community agencies. Child protection workers also work to support families in crisis where their children are not in need of protection. A child protection worker remains involved with the family to ensure the appropriate supports and community services are in place.

24,955 families received ongoing support from Children’s Aid Societies where a child was in need of protection.

Caring for children and youth

Children come under the care, supervision and protection of an agency through a court order or an agreement with their parent or caregiver. Children who are Crown wards or society wards are cared for by an agency which becomes their legal guardian.

Crown wards – permanent wards of the Crown, province has legal guardianship.
Society wards – temporary wardship, Society has legal guardianship for 12 months.
Former Crown wards- youth ages 18 to under 21 who have agreements with their Children’s Aid Society for supports as they transition to adulthood
Customary care – status Indian or native children are cared for in an agreement according to the custom of the child’s band or native community.

The Children’s Aid Society of Haldimand and Norfolk and other Societies across the province are in urgent need of foster homes and adoptive parents for children in need.

If you think you would like to foster a child please contact our intake department at 1-888-227-5437. Many believe that they are not eligible to foster children due to common misconceptions such as being a single parent. If you are unsure of your eligibility please call us today for more information.

You will not be alone if you are approved to be a foster parent. The Society will provide you with ongoing support and assistance. Being a foster parent can be a very rewarding experience that can make a significant impact on the life of a child who needs help.